If I’m not careful, I’m going to be seen as the neighborhood’s crazy lady. I wander through it almost daily, and lately I’ve taken to singing—mostly carols—as I walk. I used to stop when I passed people or cars with open windows, but anymore I just keep singing. People don’t know what to think.

Today I walked over 4 miles, which really helps with the food intake. I ate plenty and still didn’t eat enough to make 1200 calories because I’d burned so many. Thankfully, it usually averages out. Not eating 1200 would not be good for me, but I’ve been above 1200 so much this month with all the holiday stuff. Most weeks I average between 1200 and 1350 per day, so I think I’m doing okay. According to a website where I Googled my ideal weight, once I’m there I can eat over 2,000 calories and still maintain if I exercise moderately. So I think I’ll keep losing at this rate.

But! I’m still stalled out at having lost 20 pounds. Everyone assures me that the body just does that and will start losing again soon, but in my dark times I wonder if I will ever see another number on the scale.

A friend of mine, Tonya, is moving. We helped her sort through some stuff and she gave us some food, pretty baskets, and other items she didn’t want to move. 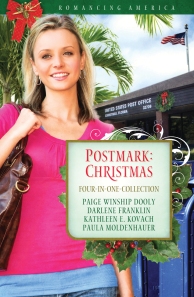 Postmark: Christmas. My novella, called, “You’re a Charmer, Mr. Grinch,” is fourth in the collection.

There was an unopened bottle of sparkling cider in the food stores. My daughter, Sarah, told me it wasn’t for us, that it was for our new friend. That gave me an idea.  I had some fancy chocolates and added the cider and one of my Christmas novellas. Then when I went through bath stuff Tonya sent home with me, I found a whole set of unopened bath stuff in a pretty little container.

It’s so cool that even when I’m strapped for money, the Lord shows me how to give a gift. I put all that stuff in one of the pretty baskets Tonya gave me. This woman gives so much to others, I hope it will allow her to pamper herself a bit. And I told my prayer group about the family and they added gifts, too!

Oh, and there was also an unopened Bath and Body set in a fragrance Sarah loves in the stuff Tonya gave me. Now I have something to finish out her gifts, too. I wasn’t sure how I’d do it with money so tight this year, but once again, God provides. ~Dec. 20, 2012

It’s so fun to go back to these old posts and see how much progress has been made since then! On the home front Sarah was THRILLED with the Bath and Body set. She’s been wanting that exact fragrance! As to weight loss, I’m *almost* down 40 pounds now–double what I was when I wrote this blog!

What can you celebrate when you look back to two months ago? 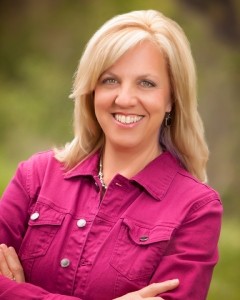