From Lumbering to Flitting – Day 82 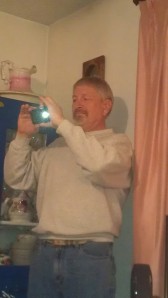 That man loves to video-tape!

Since I started getting into shape a light often slips into Jerry’s eyes. It’s almost a look of disbelief. It happened as we had an impromptu date at Daz Bog’s coffee shop. I’d hopped up to grab a napkin, then flitted back to my seat when he got that look. He started to speak, then paused to reshape his thoughts.

He grinned. “I can’t believe how you’re moving. If I had a video of you walking three months ago—”

In my mind I replaced the word walking with lumbering.

“—and a video of you walking now, you would be blow away by the difference. I could see it happening in a year or even six months, but you’ve done it in three.”

And in that moment all the work—all the resisting food, the exercising when I didn’t really want to exercise, the times I drank herb tea when I wanted an evening snack—was worth it.

Sarah called to let me know she’s been putting mother-of-the-bride dresses on Pinterest. I browsed her choices and thought, “Wow. She thinks I can pull this off?” Later she told me that with my body back I can wear things I don’t think I can.

I did lose more weight after the above was written. I’m stalled at a new low, 40 pounds down. The last few weeks I haven’t counted calories. Just tired of the discipline of it, I think. But I’m considering returning because I wouldn’t mind shaving another 8-10 pounds super quick before I go shopping!

Today’s post is mostly a celebration. Do you have a success story?