God Will Give You More Than You Can Handle

All my life, I’ve heard this phrase whenever I go through a rough patch. *And by rough patch, I mean a prickly, gnarly patch that leaves me bleeding to near death*. You’re probably familiar with those kinds of “patches”.

“God will never give you more than you can handle” is the phrase I’m referring to. 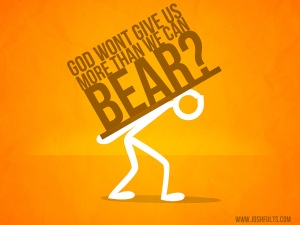 And it’s a sweet sentiment, really. The people who say it are speaking from caring and concerned hearts.

I know that sounds harsh, but I promise I haven’t suddenly lost my mind or have become an angry-with-God bitter woman who hates the world. Actually, when I realized the simple fact that God can–and will–give us more than we can possibly bear, it got easier.

And it all started to make more sense.

I’ve often trudged through trials that overwhelm me. Ever since my childhood there have been trials that have made me “grow up” pretty fast. But granted, I know for a fact you’ve had your own fair share too, because that’s the reality of life. But this last trial is the one that shook me to my core and had me searching like a mad woman for answers as to why it was happening–and how I could possibly even survive it.

I lost my Dad to cancer last month–if you’re a follower of mine, this is old news. But–it was absolutely horrific.

Every day leading up to his death was like walking through every level of hell–slowly– for lack of a better term. There’s no other way to describe it. The images…the sounds…the sleepless nights…the cries for God while we look on, helpless…the torment of rubbing morphine in his cheeks, praying it’ll absorb–but to no avail. The horrible, wrenching pain that came with lifting him up, laying him back down, lifting him up, laying him back down…because he became so restless and cried out for “home” every few minutes. And all along, in the back of my mind, I reminded myself that millions of people go through this, and have already gone through this, very thing. And it is simply unbearable. If you disagree–it’s because you haven’t been there.

This trial was so consuming that I hate to even put it in the past tense–sometimes it still consumes me. Yesterday, at my Dad’s memorial service, it consumed me all over again.

I’ve suffered from nightmares where I relived the memory over and over mercilessly–I sometimes see his face on strangers that pass and worry that I’m going crazy. I cry over sad songs in the car and torture myself with stacks of pictures and yellowed photo albums. It’s beyond just missing him. And even with a firm testimony of the gospel and with peace that he is exactly where the Lord prepared him for, it is still too much for me to handle at times. It steals my breath–and it can steal my joy.

So, the other day, I turned to the scriptures. I needed help.

I wanted to know where that phrase was that people kept repeating to me in church and at work and over the phone. Why did the Lord “trust me so much”?! Why did He think I could handle these kinds of trials?

And then I realized: I couldn’t find that quote because it isn’t there.

It never mentions anywhere in the scriptures that the Lord won’t give you more than you can handle. Yes, in 1 Corinthians 10:13 it speaks of Him giving us an escape from temptations so that it’s not too much to bear. But when it comes to pain, trials, heartache, and burdens– not once does it say it won’t be more than we can bear. Instead, it beautifully says this instead:

The words struck my heart, as you can imagine. Christ is speaking to those of us who are carrying burdens much too heavy for our own shoulders. And in that one verse he simply states the reason why we are given more than we can handle: It’s so we can come to him. It’s so we can trust him enough to hand over our heavy, crippling burdens and let him carry the load. 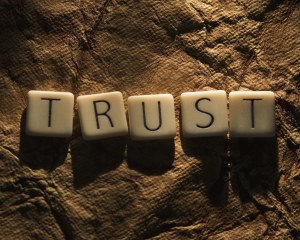 You might be shrunken with sadness or drowning in debt. You might be overwhelmingly angry at someone at church or aching under the pressures of raising children or maybe the inability to have them. You might be dealing with a terminal disease and you still have young children. And chances are–you might need your Redeemer to find you on the path and take up that heavy cross you’re dragging. Besides, even he tells us that he’s more equipped to carry it, so why not hand it over?

I suppose it’s because of pride that I always thought I could just do things on my own. I’m strong, I’d say. I’m a tough cookie. I can help others through their tribulations while carrying mine all by myself. Well…wasn’t I wrong.

I didn’t really know what needing him meant until I had no other choice. I didn’t know what it meant until I wrapped my arms around my middle so I wouldn’t fall apart–or the time I choked on tears and yelled toward Heaven. Or the times when I was utterly alone, and the silence was too much to bear. Those are the times that taught me he’s not just a want or a convenient symbol of love or a reason to do good deeds.

No, he’s the very air we breathe.

And he’s the only one who can make it bearable when life is simply anything but.