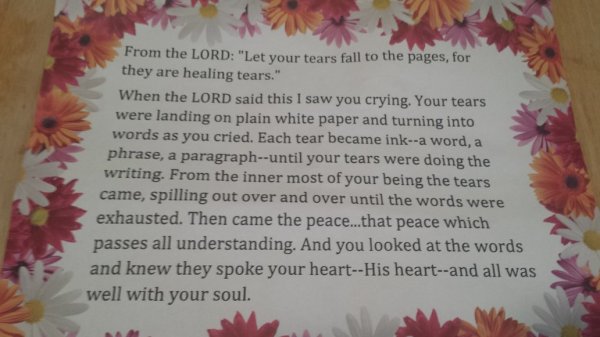 This piece of paper–and the promises here–has been on my desk for the last many weeks as I write Soul Scents: Flourish. It’s the deepest journey I’ve been on in many years. Maybe ever.

There are things I’ve not shared publicly. Things that shamed me and kept me hidden.

My friend Mary DeMuth says an untold story never heals. Her bravery has astounded me over the years. She and I are called to be writers and speakers. Our stories are meant to be told out loud, on paper, where ever Jesus sends us.

Your story may need to be told too. Only maybe you speak it to your best friend or a counselor or maybe you start with your journal in a private space.

For years my telling was in my journals. With the trusted few. In freedom sessions and counseling sessions. But now He says I’m strong enough for the telling He called me to. He says He needs me to tell in this way. He says I need to tell like this. Soul Scents: Flourish is this telling.

In the summer of 2015 I wrote several blogs, very raw blogs, that I never hit publish on. I sensed the Lord wanting me to write as if I were telling for the first time what only those closest to me have known and understood.

It was hard writing. At the time He asked me only to write those blogs, not to publish them.

Now it is different. Those blogs are part of the journey I write about in Soul Scents: Flourish, the intense walk of coming out of emotional, spiritual, and verbal abuse. I hid for many reasons. My shame. Because I thought in light of the abuse some of you have suffered that mine was unworthy of sharing. Because I wanted to “honor” those who hurt me by keeping it private.

I wrote a few things for publication. I have articles in Wounded By Words and The Gift of Letting Go, but I asked my identity stay hidden behind a pen name.

And the Lord was okay with that.

Last year He asked me if my silence was honoring or simply protecting my abuser as I was taught to do. Somehow I equated honor with silence. I don’t know if that is what the church taught or if the enemy twisted all that in my head. Now I think to honor is to be all I’m created to be.

Then He asked (through much conversation with my husband) what might happen if I broke my public silence. He asked me how many lives could heal if I shared.

Then He told me when evil’s claw is inserted into our deep places that it is real. That abuse cannot be compared. That evil is evil, and when you’ve been damaged by evil, it affects you. While you have to process the circumstances, while what happens matters, it is the assault of evil that damages, the same evil, no matter how it happens. No matter how bad it looks to someone else.

I didn’t know when I started writing and publishing the Soul Scents series a year ago, that He would ask me to tell in this last book. I didn’t know it wasn’t only about telling, but that it is about healing for me. Deep, deep processing. Without pretty little Christian bows topping off stories that aren’t pretty.

He is my healer. The first three books in the Soul Scents series share much of my healing journey. A reader who has become a friend and partner in this ministry, Wendi, asked me what the story behind the stories was. She sensed that the hard-earned truth in my first three books had a deeper root. She was right. Now I tell that story.

It’s almost finished my friends. I don’t have a release date, but we are very close. The 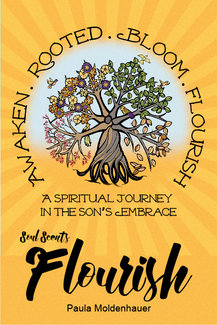 choice to publish this book is a game changer for me. A life decision covered in months and months of prayer. A choice I didn’t know I would ever make.

I pray this book will be a game changer for someone else too. That they will wake up to the shrouds of lies and twisted truth the enemy has poured over them. That they hear the voice of Jesus who sets them free instead of the voice of religion which holds them in bondage. That Scripture will begin to leap off the page with new meaning and that where it has been shaded and twisted it will now shine in pure light, offering the hope and freedom He intended instead of the putting those who are hurting in straight jackets and keeping them there.

Please pray it with me.

And pray me to the other side of this thing.