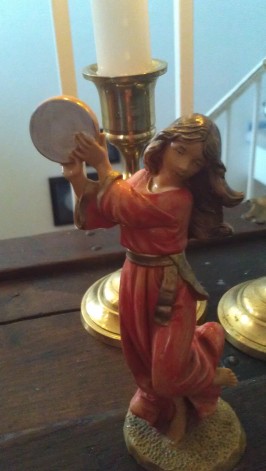 I’m dancing the song of my Savior God.

God took one good look at me, and look what happened—
I’m the most fortunate woman on earth!

What God has done for me will never be forgotten,
the God whose very name is holy, set apart from all others.

His mercy flows in wave after wave
on those who are in awe before him.

He bared his arm and showed his strength,
scattered the bluffing braggarts.

He knocked tyrants off their high horses,
pulled victims out of the mud.

The starving poor sat down to a banquet;
the callous rich were left out in the cold.

He embraced his chosen child, Israel;
he remembered and piled on the mercies, piled them high.

It’s exactly what he promised,
beginning with Abraham and right up to now.

Have you ever thought about Mary’s Magnificat, how it is both personal and corporate at the same time? She starts out by worshiping in wonderment that God chose her. Other versions of Mary’s song use phrases like: He took notice, He looked with loving care, He looked on me, one who is not important. Mary stands in wonder at that the King of Kings and Lord of Lords chose her.

Then Mary moves into praise that is both personal and corporate, for her son would also be her Savior. Mary worships the Messiah who came to scatter bluffing braggarts, knock tyrants off their high horses, and pull victims out of the mud. (Other versions say He scatters the proud and exalts the humble, that He brings down rulers and fills the hungry with good things.)

As I read this passage today it feels intensely personal.

He looked upon me.

The King of Kings and Lord of Lords took notice, looked upon us with loving care. We may think we are not important, that we are humble and lowly. Nobodies. But God chose us.

He chose us to be the recipients of His grace and mercy. He chose us to receive His light and life-giving truth. He chose us for truth that sets us free. He chose us. For us He comes, baring His arm and showing His strength. He fights for our freedom.

He won it at the cross.

And He fights for each of His beloved, showing them the freedom already won.

He stands firm against evil and teaches us how to do the same.

He invites our poor, hungry hearts to a banquet of His love.

He came so we could flourish.

I imagine her—young and weary. She’s spent way too much time on a donkey and now she’s given birth—for the first time—in a dirty, stinky place. I’m sure it wasn’t what she expected when she sang out her Magnificat. But then the shepherds come. Shepherds. They are the class of people who don’t intimidate her, but certainly not who was expected to celebrate the birth of the King! But they have lovely, breathtaking news. When her son was born, the very sky opened wide revealing a multitude of angels singing and dancing and shouting about His birth. And they sent shepherds—shepherds!—to gaze upon her little boy.

Mary’s been through a lot. The accuser has been hard at work, heaping condemnation upon her. Instead of the honor she expected as one chosen to carry the King, she’s been called a harlot. And worse.

But the shepherds get it.

They see and honor her child.

They say her baby, her baby, is the Savior of the world.

In those weeks of unjust condemnation, in those months of ridicule and gossip and pointing fingers, those months when her body swelled and hurt, when her emotions were raw, when weariness overcame her, it’d taken all she had to believe the truth.

And her son, her tiny baby sleeping in a trough meant for animals, was King, Savior of the world.

Nothing really made sense, but God was at work. In those brief moments of wonderment, when His Spirit gave direction and explanation, she saw it. She held onto it. She had to.

Life was much harder than she expected.

But it was also more glorious.

“Mary kept all these things to herself, holding them dear, deep within herself” (Luke 2:19, MSG).

Later the magi came. Then the wild flight to safety in Egypt. Finally to Nazareth, where the wagging of tongues continued.

But through it all, “Mary treasured all these things, pondering them in her heart,” (Luke 2:19, NASB).

Friends, our freedom came at a cost for Jesus.

It comes at a cost for us.

Only our Lord knows what events will take place on our journey into the glory of His plans.

But He comes to us with promise.

We believe the Scriptures, the promises that our Savior freed us us from the darkness and places us in His kingdom. Those promises are for all, corporately and individually. But He doesn’t stop there. He whispers truth as we read His Scripture. We hear wisdom in the words of those around us. Lines from songs jump out and grab our attention and play for years in our hearts. We learn His voice. Sometimes He whispers in the night or gives dreams or sends prayer warriors. We test everything to be certain it is from Him, and we cling to, ponder, treasure all of it in our hearts. When He comes with instructions—personal instruction—like it’s time to flee a tyrannical king or receive a personal blessing—like hints of the great callings of our life, we respond. Quickly. We believe.

Jesus, like Your mother, Mary, I am just me. Complicated and simple. Emotional sometimes. Afraid often. But capable of great movement as I surrender to Your Spirit. I treasure everything You’ve told me, every event You’ve orchestrated. You regarded my lowly estate and fought for my freedom. I am Your servant. Your bride. Your beloved. I have a bigger picture than Mary did. I know how Your life here on earth unfolded. I know that the cross, which pierced precious Mary’s heart, won the victory for my life. I know You purchased me so I could live in joyful intimacy with You. You won me for Yourself. I surrender to Your love. To Your sacrifice. I ponder all You’ve done for me, personally and corporately. Help me to listen to Your voice. Keep me from the lies of the deceiver, the voice of the accuser, and help me to know Your voice only. When You speak, let me be like Mary and say yes to all You ask. Help me move when You ask me to move. Help me surrender to the call of my life, the plans You had before the foundations of the world.

Join us each day through December 25 for my journey to the manager–from a child who believed Christmas was taboo to a woman who longs to worship at Christmas. These devotional thoughts are excerpted from Soul Scents: Flourish, which releases soon. If you’re chiming in late, you can see the whole series here. Just scroll down to December 1 in this category.

3 thoughts on “Bursting with God-news!”