Free Kindle of My Novel!

In honor of the April 15th anniversary of the sinking of the RMS Titanic, the book I co-authored with Kathleen E Kovach, Titanic Legacy of Betrayal, will be free on Amazon’s Kindle the following dates: TOMORROW and Saturday, April 7 – 8, and Easter weekend, which coincides with Titanic’s Anniversary (April 14, 15 and 16).

Happy Easter from Kathy and me. We hope you enjoy this gift! 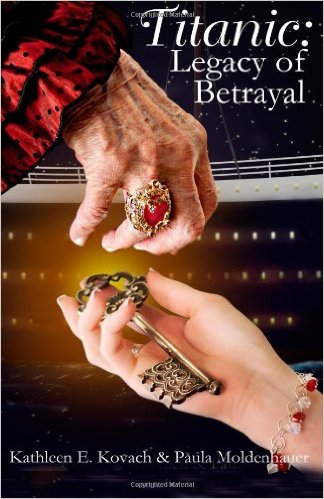 A secret. A key. Much was buried when the Titanic went down, but now it’s time for resurrection.

April 1912 – Olive Stanford boarded the Titanic determined to protect all she held dear. Her secret will go with her to the grave—but how can she face the afterlife carrying the burden of her actions?

April 2012 – Portland real estate agent, Ember Keaton-Jones, distrusts men, with good reason. Ever since her great-great-grandfather, Thomas, deserted the family after the fateful sinking of the Titanic, every Keaton male has disappointed. Ember is on the brink of a huge sale when a stranger shows up with a key to a century-old secret challenging everything she believes. She meets forward-thinking Jeff Dawson who is working in the family’s musty antique shop and finds an unexpected ally in unlocking the mystery of her past. But can they undo the legacy of Thomas Keaton’s betrayal?

(PS, don’t forget that if you leave a comment on any of my BLOG posts between now and Easter, your name will go in for a drawing for a book. Winner gets either The Joy of Letting Go, by Vicki Caruana or Colors of Hope, by Lisa Joy Samson.)

Hi Gang! I interrupt my normal blogging to let you know the book I co-authored with Kathleen E. Kovach, Titanic: Legacy of Betrayal, is on sale through midnight. It was discounted to honor the anniversary of the sinking of the RMS Titanic. I’m sorry I didn’t let you know sooner! If you act now you can purchase the e-book on Amazon for 99 cents. (Of course this is a paperback available as well, but not for 99 cents. :-))

I’m a bit behind on blogging this week! I attended back-to-back trainings, one with Life Force International, and the other at the ACFW Conference. They were AWESOME and full of epiphanies for me. I hope to share about them soon. I think I’m also about ready to write about some of the things I discovered this summer. Whew! A lot on my mind to download. I can’t wait to clear a space to write about all of these really cool things!

Also, just a hopeful note for those of you wondering about my weight loss journey. I’ve not only maintained, but this morning the scale showed me down a couple more pounds! While I had to let go of letting the scale dictate my mood as the pounds came off–often more slowly than I wanted–I have to tell you that I think it’s okay that I wanted to do the Snoopy Dance!

For today’s post, I’m linking to a blog that featured–ME!. I talk a little about the stuff we do here, the nomination for the Carol Award for my novella, and the writing journey. Please visit the Inkwell for the whole story–and if you want, tweet or share the blog on Facebook. That would help ACFW Colorado get the word out about their blog as well as support me in my journey as an author.

YOU CAN FIND THE AUTHOR SPOTLIGHT ON YOURS TRULY HERE